Home
About
Get There
Tickets

Wallingford is a quaint Connecticut town nestled halfway between Hartford and New Haven. The picturesque village is reminiscent of the opening shots of the Bob Newhart Show. However, true to the New England towns depicted in Stephen King novels, this quaint exterior belies the town's sinister secret.

Hiding in the woods at the end of a lonesome road is a world of fright and fantasy that will test one's mettle, temper one's cavalier courage, torment one's sanity, and taint one's soul. This vortex of dark entertainment is the Trail of Terror.

The Trail of Terror has bent the minds of the innocent and benefited local charities for 22 years. The dominion of this operation’s overseer, Wayne Barneschi, began as a home haunt. Through enlisting the help of dark forces, a veritable coven of close friends and family members, they made the leap to become a professional non-profit haunted attraction.

The Trail resides on four appalling acres of forsaken forest. The haunt scenes take up fully half of that area. The rest is given over to the ticket booth, guest line, snack bar, actor staging, costumes, and make-up prep. Each weekend in October, 100 volunteer performers and 25 or more volunteer staff converge to bring forth eldritch entertainment for up to 2,000 patrons a night.

Over the summer, the volunteer staff change approximately 75% of the Trail’s scenes so customers are confronted with novel new frights each season. After entering the front gate, guests walk along the outdoor trail through 30 different scenes. Unsuspecting patrons must venture through crawl spaces, squeeze walls, across a rope bridge, aboard a boat, under a spinning carousel, and through a vortex tunnel on their march of mayhem.

The Trail of Terror’s award-winning website (http://www.trailofterror.com) features a new theme each October which includes a back story on recurring characters. The complex narrative is then carried into one or more scenes in the Trail that feature the referenced characters. Further, characters will sometimes be featured on the Trail’s Facebook (http://www.facebook.com/trailofterrorct) and Twitter (http://twitter.com/#!/trailofterror) sites which give patrons opportunities for additionally demented interactions.

Over the years the Trail donated close to a million dollars to many local non profit agencies such as the Red Cross, Wallingford Emergency Shelter and works closely with C.R.E.W. (Community Revitalization Efforts of Wallingford) to support students who provide humanitarian aid in areas where it is most needed.

The volunteer staff of the Trail believe firmly in the motto “We Scare Because We Care”. Their hard work and sacrifice each season is done not only to provide guests with the most nightmarish frights possible, but to benefit those in local community who need support the most. 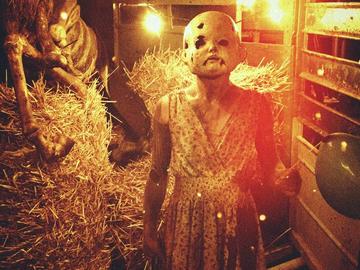 READ THIS WARNING BEFORE ENTERING THE TRAIL OF TERROR
THE TRAIL RESERVES THE RIGHT TO REFUSE ADMISSION TO ANYONE.
YOU WILL experience intense audio, lighting, extreme low visibility, strobe lights, fog, damp or wet conditions, moving floors, special effects, sudden actions, and an overall physically demanding environment.
You SHOULD NOT enter if you suffer from any physical or mental ailments such as asthma, heart condition, vertigo, seizures, respiratory condition, or any type of intense phobia or if you are pregnant. No infants or children under the age of 5.
DO NOT smoke, run, eat, or drink inside the Trail. Additionally there is no touching of actors, customers, or props inside the Trail. Please stay on the path at all times. Cell phones should be put away at all times when in the Trail. Lost phones or property may not be located on the same night. No video or flash photography may be taken within the Trail. You will not be admitted or asked to leave the property if any of the rules are not followed.
DO NOT enter the Trail if you are intoxicated, wearing any form of cast, medical brace, using crutches, or have any type of physical limitations. Do not enter the Trail if you are taking medication or using drugs of any type. You will not be admitted if any of these conditions are noticed by our staff.

THERE ARE NO REFUNDS! ENTER AT YOUR OWN RISK!
Your ticket is a revocable license and may be taken and admission refused upon refund of purchase price. Holder of this ticket understands that there is inherent risk involved with attending this attraction. Holder voluntarily assumes all risks and dangers associated with participation in this attraction. In consideration and acceptance of entrance into this attraction, holder agrees to release the operator, it’s parent corporations, affiliates, officers, directors and employees and landlord from any liability, harm, injury or death, cost or expense whatsoever that may arise directly or indirectly from attending this attraction or any of the attractions at this location.

other events by this organization